Congratulation! You have cleared up the criminal case and found the real criminal. Justice was served! Below you can see all the details of this case.

WARNING!Please don’t read this page if you didn’t finish the game!

Joseph Bremer, age unknown, businessman, owner of a company, father of three children, has a wife and a lover.

Carl Notebeck, 30 years old, freelance journalist who provides reports to various agencies and newspapers. He drove past the Bremer’s house when it was burning. He took a few pictures without calling the fire department, and drove away. Some time before he was involved in an ugly affair that has become known throughout Germany. He staged the escape of monkeys from a zoo in order to record a video and sell it to the media. For this reason he is considered as the prime suspect. Currently he is on the run.

The suspects (according to Carl):

Alma Preuß, 26 years old. Joseph’s lover. Joseph promised her to divorce his wife, but he did not. On the eve of the fire, the two had a heated argument.

Frida Bremer, 34 years old. Joseph’s wife. The day before the fire she learned that her husband was having an affair. Because of this they had a fight and she went to her mother’s taking their child with her.

Heinrich Katz, 45 years old. Joseph’s driver, who conscientiously worked for his boss for more than 20 years. He is an exemplary family man and a father of many children. Joseph dismissed him unexpectedly, without paying him compensation, threw him basically on the street for no apparent reason.

Lukasz Bremer, 26 years old. Joseph’s son from his first marriage. A troublemaker who was in constant conflict with his father because he could not forgive him for leaving the family. Recently, his father deprived him of his monthly allowance due to problems at his vocational college.

Brothers Fischer. Lenz, 42 years old, and Erz, 35 years old. Well-known bandits. Joseph lost a large sum of money in gambling, but did not pay the brothers back. The two brothers put a lot of pressure on him to pay them back.

Walter Sievers, 62 years old. Bremer’s neighbor. A belligerent old man. Has a long-standing conflict with Joseph regarding the garage, which the businessman had allegedly built “in the wrong place” so that the apple trees on his property did not get enough sunlight and therefore bore no more fruit.

Time of the fire

In the photo, in the background behind Joseph Bremer, one can see the stove and the clock. The same clock, but already burned, can be seen on another photo from the police report.

The clock shows 11:50 p.m. According to the police records, the fire started at the kitchen stove, and the clock hung over the stove. It could be therefore concluded that the fire started on May 30, 2017 at 11:50 p.m. or a few minutes before. This time difference is negligible. 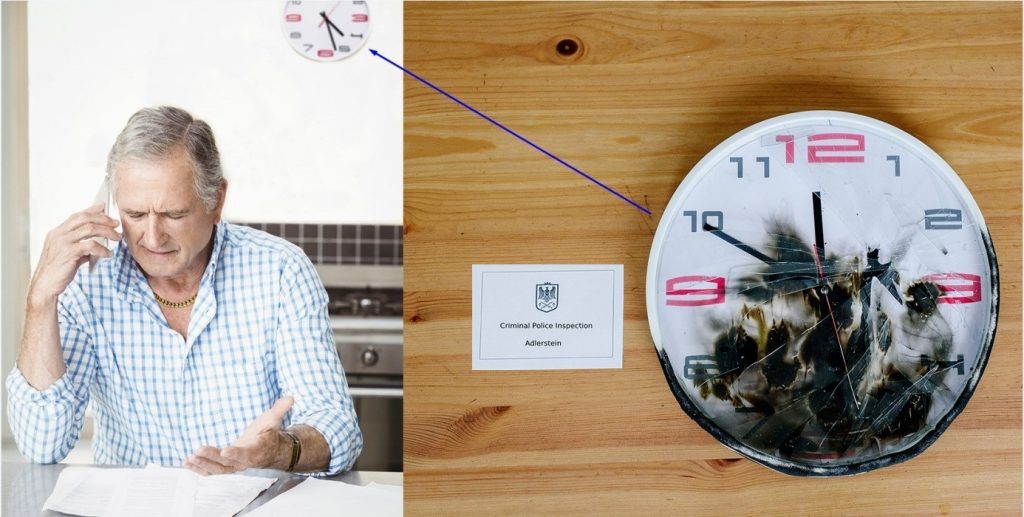 According to the navigation device, Carl’s car left the track to the preset destination and turned off onto the street where the fire was burning. After that, his car continued the journey to the original destination. 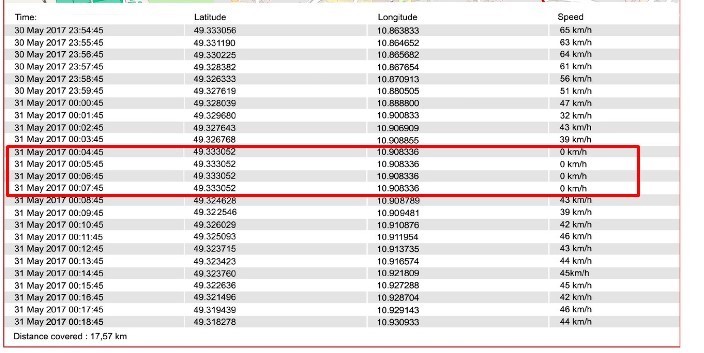 It is obvious that Carl should have been at some other place at 00:04. You could tell that Karl drove past the burning house, saw the smoke, turned off and took a couple of pictures. Then he continued his journey.

Result: Result: Carl could not have committed arson and is therefore innocent.

The map with the route shows the “AdlersKing” sign. The burned house of Joseph is located near the club (the address matches the one from the fire department report). Between the club and the house you can see a track that suggests that this route can be reached in about 6 minutes by car.

On the matchbox you find the address of the Facebook page of Lukasz, as well as the logo of the AdlersKing Club. If you’ve found Lukasz’s Facebook profile, you could see that he posted the pictures in the club, which were published on May 30, 2017 between 11:30 and 11:50 pm.

So one may come to a conclusion that Lukasz should have been in the club when the fire began. 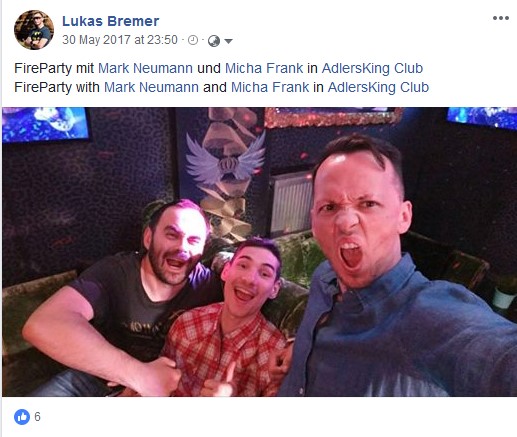 In the Facebook photo you can see two more people, Mark Neumann and Micha Frank. On their personal Facebook pages you can find selfies, which were recorded at 11:40pm and 12:00am and in which Lukasz can be seen as well. 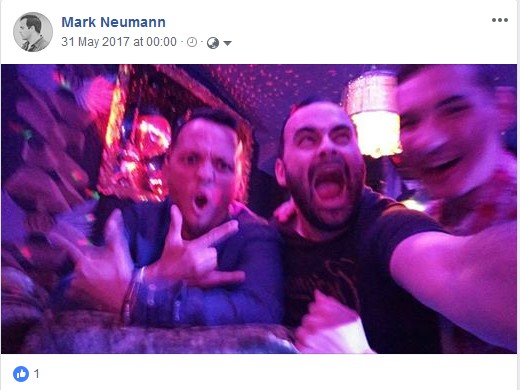 Result: At the time of the arson, several people in the club had taken selfies and Lukas can be seen in these photos. A rock solid alibi.

The documents contain a page from the medical treatment card, in which an injection was prescribed. According to the treatment plan, it could be seen that Walter Sievers was given a strong tranquilizer on 30.05 at exactly 23:00. He must have fallen asleep after that. 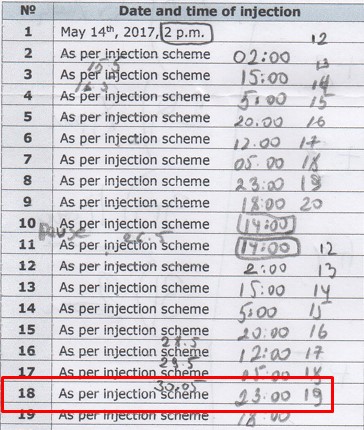 Result: The neighbor also has an alibi for the time of the fire.

The article in the newspaper describes the arrest of several football fans of the Adlerstein fan club after the riots on May 24. The article contains the initials of both brothers. All arrested fans were sentenced to 15 days of incarceration.
There are names of brothers Fisher in the list of the club membership fees, which indicates that they were indeed fans of the football club. 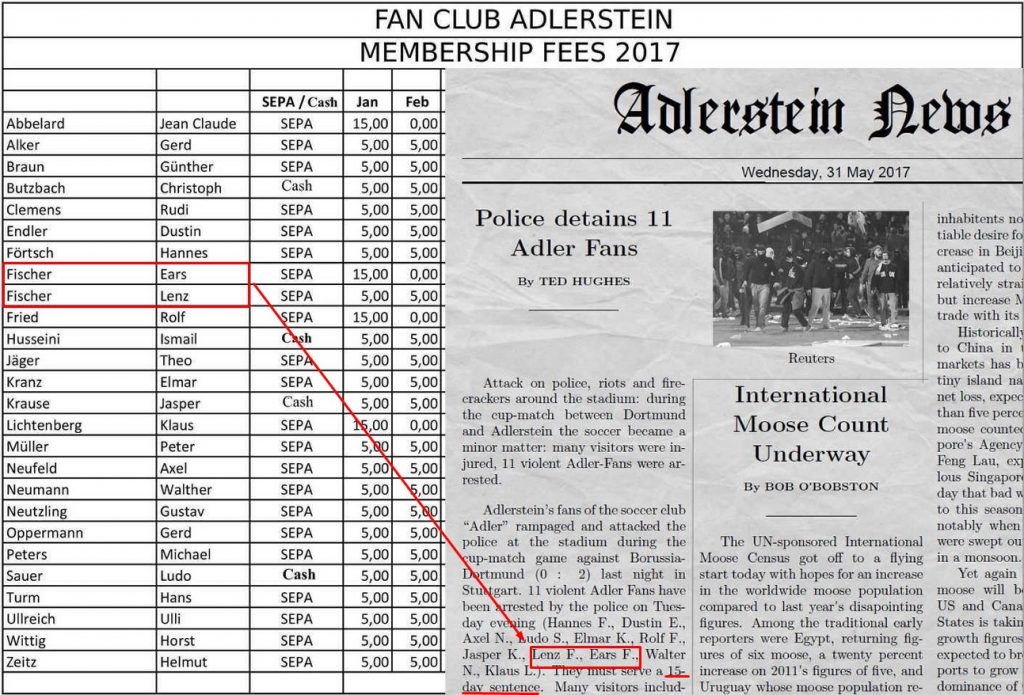 Result: At the time of the incident, the brothers were in prison and could not have committed arson.

In the documents you will find the flight tickets for a trip to Mallorca issued for Joseph Bremer and Alma Preuss, which were purchased on May 23, 2017, as well as the reimbursement receipt for one of the tickets. Alma wanted to surprise Joseph and bought two tickets, but he refused to fly with her, which led to a heated argument. This is also evident from the SMS correspondence. Alma gave Joseph the ticket back and flew on vacation alone.
However, Alma had a motive – jealousy, which can be seen in her SMS threats. According to her plane ticket back to Germany, she must have been back in the city during the arson.
Although, according to a newspaper article, one can learn that on May 30th a concert given by the rock band “Lightning Gun” in Barcelona was canceled. The reason for this was the hurricane that led to the cancellation of all flights from Palma de Mallorca airport back to the mainland starting on the afternoon of May 29th until June 1st.

Just like the rock band, Alma was on the island at that moment: this is confirmed by the letter she sent to Joseph’s wife on May 29th in the morning from Mallorca. 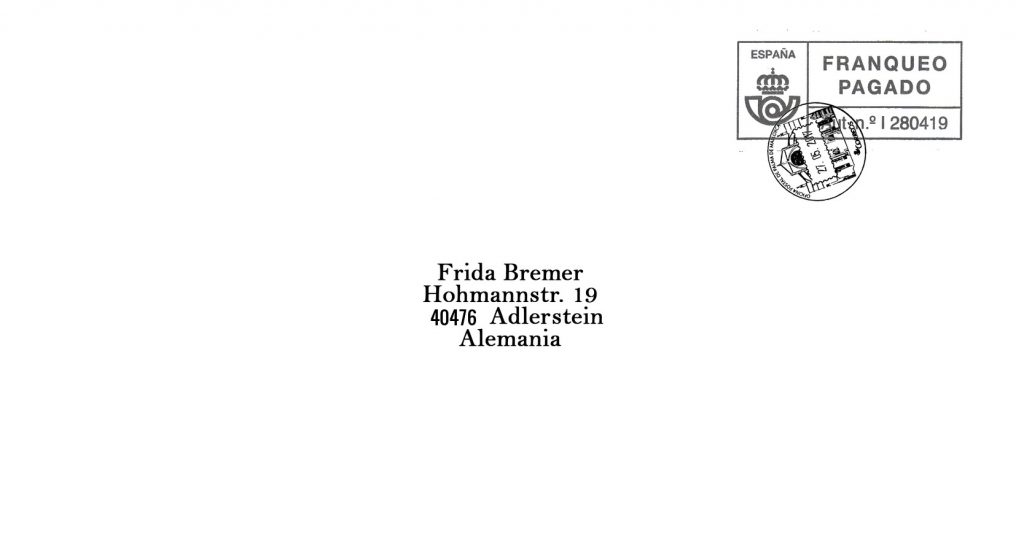 Result: Alma could not leave the island because of the storm and the flight cancellation and therefore did not commit the arson. 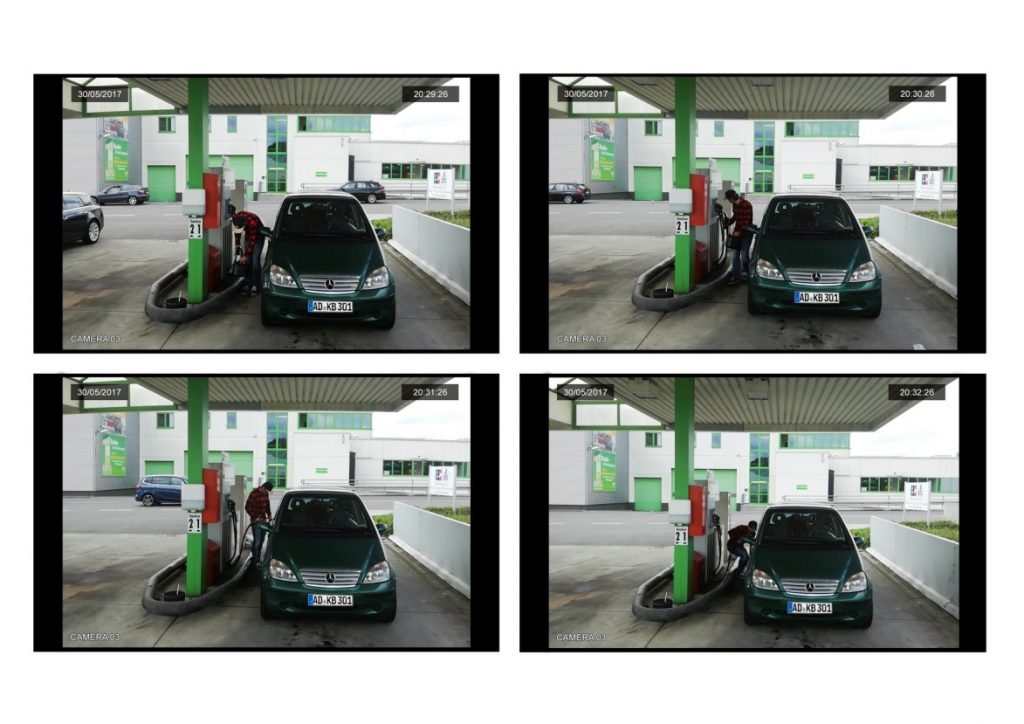 From the diary of Bruna (daughter) it is clear that Frida drove on May 30th to a meeting. At the same time she wanted to pick up a book about Harry Potter. However, she did not return until the morning of May 31st. 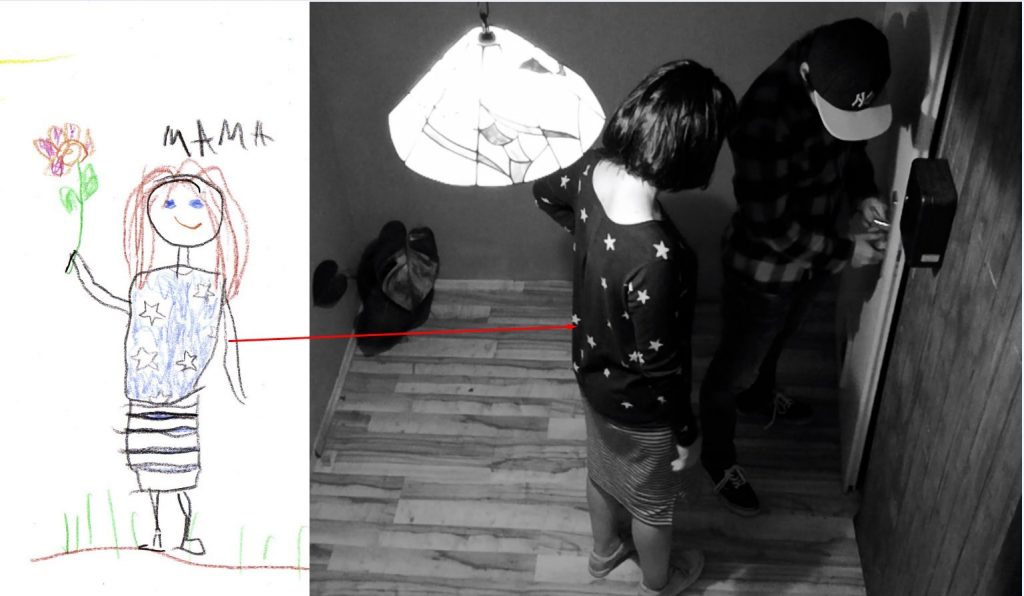 In the photo of the hotel video surveillance you can see Heinrich Katz and a woman in exactly the same clothes as in the picture of Mitzi, furthermore, you will find the wrong signatures with fictitious names (the characters of the Harry Potter book, which Frida was supposed to pick up), which indirectly indicates that this woman could have been Frida Bremer.

Now it becomes obvious why Bremer had dismissed his driver H. Katz without giving him explanation and without severance pay.

Result: Heinrich and Frida have an alibi.

When decrypting the SMS messages you can decipher the Bremers’ wedding day, which was used as a password to his personal information. The insurance documents clearly indicate that Bremer was insured against fire and could claim the insurance benefits in such case. 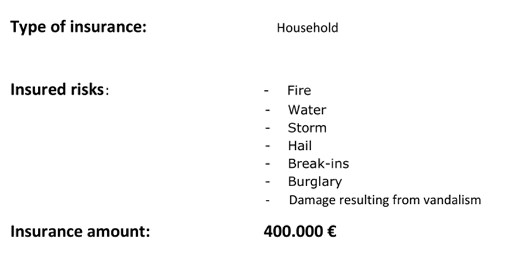 His medical reports indicate that he was suffering from an iron deficiency anemia. He did not know that, as the analysis result did not arrive until after his death. An anemia patient can lose conscious in case of an insufficient oxygen concentration in the air. 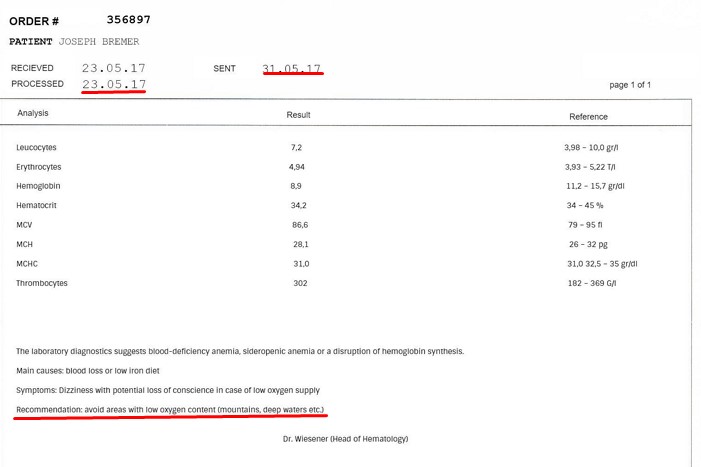 All this indicates that Joseph, being sensitive to the oxygen concentration, fainted during the fire, remained unconscious and died.

All the characters of this story had different motives for this crime, but only Joseph had no alibi and apparently tried to set his own house on fire to claim the insurance money so he could pay his debts, but underestimated the severity of his illness, lost conscious and subsequently died in the fire.

So the fire victim is the arson criminal.

The case is closed. 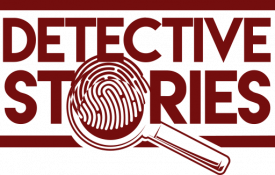 Did you like detective story? We need your help!

Have you found detective story exciting and would you like to share it with other players? We kindly ask you to write a short Amazon review here.

This helps new players to decide on one of our stories – which is in turn also very helpful for us as a  game publisher company.

If you have any questions, complaints or recommendations, please contact us. We are always happy to receive feedback on how we can improve our products.

Thank you very much 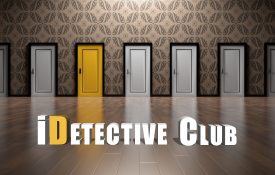